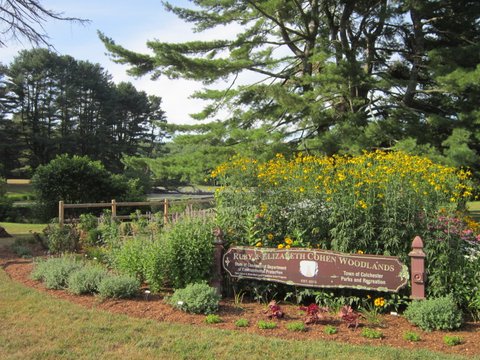 Ruby was a life long resident of the Town of Colchester whose accomplishments started when he purchased Colchester's Landmark restaurant, "Harry's Place" in 1925. Ruby managed Harry's until his retirement in 1973.

Ruby was elected to the Connecticut House of Representatives in 1943. Ruby was instrumental in the establishment of Gay City State Park in Hebron, restoration of the Comstock Bridge in East Hampton, and the preservation of the Gelston House in East Haddam.

However, he was best known by the townspeople as a political advisor and mentor, often holding court in his barn, opening his wildlife preserve for fishing derbies, Boy Scout campouts, picnics, weddings, or simply serving a great burger on the grill to anyone who was hungry or who would listen.

He will be remembered for his political savvy, his love of the outdoors and the environment, and his many contributions to the Town of Colchester and State of Connecticut.

Also called the Ruby Cohen Property or Cohen Woodlands.  The majority of the Ruby and Elizabeth Cohen Woodlands is heavily covered by trees. There are many acres of grassy open space and two ponds separated by McDonald Road. The property is now 206.21 acres as a result of several land acquisitions. Many students from Bacon Academy use this property as a location in support of various curriculums. Each year the Colchester Elementary School uses this park as a field trip destination for hands-on nature science activities for their young students. Over the years, local Boy Scout Eagle projects have created 3 hiking trails on different areas of the property including a park/trail map, a 6-panel educational board near the gazebo. Cohen Woodlands is certified as a wildlife habitat through the National Wildlife Federation. Colchester earned the NWF Community Wildlife Habitat certification in 2010 being the first such community in Colchester and the 36th in the United States. The Butterfly Pollinator Garden is certified as a Monarch Waystation through MonarchWatch.

To help confront the plight of pollinators and decline of Monarch butterflies, an Advanced Master Gardener/Colchester Garden Club member began a community outreach project to create an educational butterfly-pollinator garden near the park's sign.  In 2014, the original garden was reclaimed and planted.  The Butterfly-Pollinator garden was doubled in size in late 2015.  Native plants including different kinds of Milkweed (Aesclepias), perennials, annuals and shrubs were added in 2016 attracting a wide variety of butterflies, other pollinators and hummingbirds.  The project was funded by Connecticut Master Gardener Association grants (2014-2016) along with material donations from members of the Colchester Garden Club.  Significant volunteer hours were donated by certified Master Gardeners, Master Garden interns, garden club members and community volunteers.  Ongoing garden maintenance is a community service project of the Colchester Garden Club.

At the Cohen Woodlands location, this provides an opportunity for visitors to walk and read to youngsters a book focused on nature, gardening or wildlife.    This literacy, fitness and nature initiative is a partnership between the Cragin Memorial Library, Colchester Children's Collaborative (C3), Colchester Garden Club, Colchester Land Trust and the Community Wildlife Habitat of Colchester.  Books will be changed on a periodic basis. It is recommended children wear sneakers or closed-toed shoes. The StoryWalk begins at the right side of the field from the parking lot and continues across the back of the field from right to left.

The Story Walk books are changed seasonally throughout the year. We welcome you to visit frequently to enjoy the new books at the park!